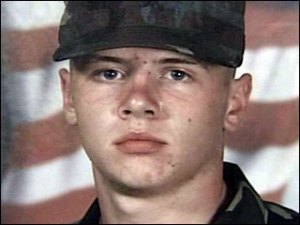 I have written and rewritten this at least ten times which – if I was half as self-aware as I like to think — should have told me something. Because when I get stuck like this, I am almost always closing in on some emotion or anxiety that I would rather ignore. (Great strategy, huh? Ignoring emotions.)

But last week I was haunted by the experience of the Petee family in Oregon whose son, Stephen Phillips, is serving in Afghanistan. In the midst of a firefight, the young soldier accidentally activated his cell phone and sent home an audio message with a recording of the whole business — gunfire, screaming, everything.

It struck a chord.

My son, of whom I am enormously proud, served in the Peace Corps in West Africa. During his service, the largely stable country where he was serving was thrown into chaos by the death of a long-standing dictator. For one short period, his safety was in doubt, but thanks to cellular communications, he remained in cell phone and email contact for all but several days.  Nothing happened even remotely comparable to the war in Afghanistan, but there was a lot of political violence and killing.

And to this day I still debate whether, given the choice, I would have preferred the detailed phone calls and emails I received or preferred ignorance.

I know mental health orthodoxy: It’s better to know the truth than to live with ignorance or illusions. But the digital age has enabled a level of immediacy that really tests this principle. Might there be times,  particularly in our personal lives, when globalization and transparency and instantaneous communication is unbearable? Do we always need, or can we always tolerate, living in real time?

Sure, I was able to share a few of my son’s most challenging moments. But the pain and the fear were palpable, despite the laughter and casualness I tried to project on the phone. He never experienced anything close to the soldier from Oregon, but – for a Dad who used to worry about his walks home from school — a civil war by cell phone was pretty painful.

The worst moment was when, after several days of frequent contact, the government shut down all cell service. At that moment, I had to instantly transition from full awareness of his situation to full ignorance. Not for the faint of heart. Not for me.

And so I again ask myself: Would it have been easier knowing little or nothing the whole time? Or was I less anxious because I had periodic, albeit erratic, news?

I only am certain of one thing: The answer doesn’t mean a thing. Because the digital genie is completely out of the bottle. We are now full participants in an age when we will quickly learn painful realities whether we want to or not.

My son is fine, by the way.

For those of you who didn’t hear it, here is the phone message that 22-year-old son Stephen Phillips left his parents on April 21st. The recording includes three minutes of gunfire, a voice shouting “Incoming!”, and a stark and sudden ending. Stephen Phillips suffered no injury.

I wonder if we can say the same thing about his mom and dad.