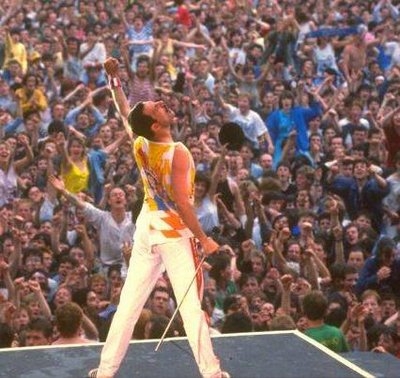 Was it the edgiest music around?

Not really.  There was a place for all that — Jimi Hendrix, Cream, Stones  Joplin, and, of course, the Lizard King — but today I have been thinking about of one of the greatest rock and roll singers ever. Freddy Mercury could walk into the world’s biggest venues — the Wembleys and countless other stadiums — and take ownership, assume command. Concerts in front of 100,000 people became intimate get-togethers for a guy who could be in his element in front of 325,000 people.

Stadium rock is easy to make fun of. Not everyone can command the space. Music is lost amidst the mayhem. I once saw the Beatles do it, but the music was lost in the screams.

Freddy Mercury turned stadium rock into high art. He had a soaring voice. He was backed by incredible musicians. He was flamboyant and joyous. He loved being a “front man.”

And right in the middle of it all, he was gone.

This will always be one of my favorite performances.