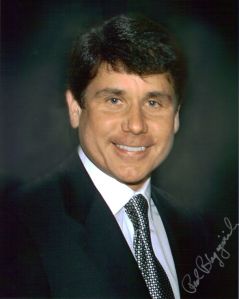 I have never been someone who easily finds pleasure in other people’s travails. It’s probably superstition as much as anything, and I am all too aware that human fallibility both goes around and comes around.

But today’s events in Illinois, in which Governor Rod R. Blagojevich  was  arrested on corruption charges for the attempted sale of Barack Obama’s senate seat, are simply too bizarre and too entertaining to ignore.

I am privileged to teach in a department with students and faculty in various stages of writing and developing film scripts.  Several of my faculty colleagues are accomplished and produced writers for film. A whole lot of film talk goes on. Sometimes just listening is like being in a master class.

So I have read some fine work.  But I don’t recall anything that anticipated some of the cool stuff that federal prosecutors attributed to Governor Blagojevich in today’s complaint.

This was a tough guy who meant business.  We’re talking Scarface or Goodfellas quality. Apparently you did not mess with Rod Blagojevich. Check out these excerpts from the complaint:

·        ROD BLAGOJEVICH said that the consultants  (Advisor B and another consultant are believed to be on the call at that time)  are telling him that he has to “suck it up” for two years and do nothing and give this “motherf___er   [the President-elect]   his senator. F___  him.  For nothing?  F___  him.” ROD BLAGOJEVICH states that he will put “[Senate Candidate 4]” in the Senate “before I just give f___ing  [Senate Candidate 1]  a f___ing Senate seat and I don’t get anything.”

·        Later in the conversation, ROD BLAGOJEVICH said he knows that the President-elect wants Senate Candidate 1 for the Senate seat but “they’re not willing to give me anything except appreciation. F___  them.”

If you are interested, read the whole federal complaint.  I am sure that, at this very moment, scripts about corrupt politicians – previously rejected as implausible or as caricatures of venality — are being rescued from slag-heaps across the country and being given a second look.

Think of it: One week to the day after the election, when many of us were imagining what it would be like to call Barack Obama Mr. President, Governor Blagojevich was practicing his own term for referring to the President-elect:

“They’re not willing to give me anything except appreciation.  F___   them.”