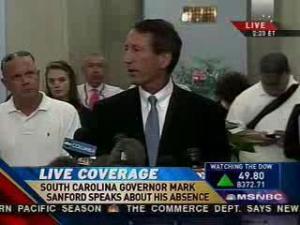 “Oh what a tangled web we weave, When first we practice to deceive”

In the years I have been teaching, my students and I have closely monitored the evolution of the distinction between public and private. Slowly, and not always clearly, we have watched society change from a place where a private life could be conducted away from media scrutiny to a society in which virtually no private space seems to exist.

We have also watched as the public gradually came to accept that their national leaders would come with all manner of personal flaws that would not necessarily disqualify them from public office. It is almost hard to remember a time when some marijuana use could potentially derail a campaign for national office.  I remember.

Infidelity, though, still seems to occupy a somewhat ambiguous place in political culture. To be sure, we have in the last two decades knowingly elected a president who had committed adultery. There might have been many who argued that adultery revealed something important about character. But those people were outnumbered by a majority who listened to the  the taped conversation between Bill Clinton and Jennifer Flowers before the election and decided that it would not affect their vote.

Today, though, in South Carolina, we witnessed a bizarre episode that will almost certain reopen the discussion of when it might be entirely appropriate for the public to consider private behavior when evaluating public performance.

Governor Mark Sanford, after close to a week in which virtually no one knew his whereabouts, admitted — in what the New York Times called a “rambling” press conference — that contrary to previous reports placing him on the Appalachian Trail for some R&R,  he had actually been in Argentina conducting an extra-marital affair.

I see this as an easy example of an episode in which private behavior clearly affected public performance; a case in which that behavior might rise to level of negligence and dereliction of duty. And I am not thinking primarily about the sex.

Governor Sanford disappeared. His wife told reporters during his absence that she didn’t know where he was. At some point, she announced that he was hiking on the Appalachian Trail.  While she actually may have known more, the fact remains that the people of South Carolina didn’t. Their Governor was hiding.

And even if he had simply been ballroom dancing, he was would not have been available to his constituents  if there had been some “God forbid” moment. The fact that he had disappeared into an ongoing extramarital affair simply reveals a little more of what went into his cost/benefit analysis when  he contemplated flying the coop.

I will always have a weakness for human frailty.  I won’t even bother to say that I don’t expect perfect leaders because no one is perfect, especially those who claim to be. Just because Sanford is an outsized character in a news saga does not mean he is not also a human being who hurts and hopes and struggles.

Easy call. He has to go. Private acts, in this case, lead directly to professional neglect.

Later Comment: Just yesterday in my class Journalism and Society, we were discussing how honesty, even about difficult topics, usually trumps deception.  Read the statement that Governor Sanford’s staff released in the midst of his disappearance.

“Gov. Sanford is taking some time away from the office this week to recharge after the stimulus battle and the legislative session, and to work on a couple of projects that have fallen by the wayside. We are not going to discuss the specifics of his travel arrangements or his security arrangements.”

I don’t know about you, but I find this kind of weasily  lie drafted by a junior  flack to be a greater sin than adultery.

Projects that have “fallen by the wayside?” Right. And even their decision to lie and put him on the Appalachian trail was calculated political claptrap. The Appalachian Trail comes close but does not  run through South Carolina. So the lie put him in the glory of nature, kept him “fictionally” very close to South Carolina,  but allowed them to “honestly” say he was “out of state.”

1 thought on “From the Appalachian Trail to Buenos Aires: An Easy Case of Private Behavior Affecting Perfomance in Public Office”