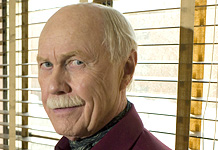 Harve was one of the great leading men in musical theatre and musical films.  But thanks to Ethan and Joel Coen,  late in his career he was cast as William H. Macy’s father-in-law,  Wade Gustafson,  in the film Fargo.

His performance was as remarkable as the film. And the scenes he did with Macy were classics.