Tomorrow President Obama will visit the Cape Coast Castle in Ghana. The castle was a major departure point for Africans sold into slavery. This was where the horrors of the middle passage began.

My son, who was in the Peace Corps in West Africa at the time, took me to the Cape Coast castle in 2005.

The castle, as you can see in my picture,  is actually a very peaceful and beautiful place. I remember visitors approaching the entrance quietly. But the quiet was temporary. Because as the guide described the atrocities that took place in each tunnel, each crevice, it was impossible not to imagine the terrified voices and the anguished moaning. 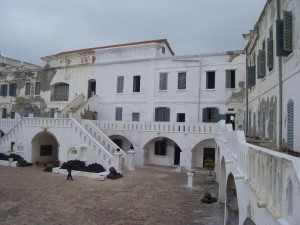 Yes, moaning. I thought I heard moaning. Then, we descended into the bowels of the underground prison, and heard stories of parents and children being violently separated.

Finally we reached the exit that led directly to the gangplanks of thousands of slave ships, the exit where millions faced either actual death on the ocean journey or survival in slavery that became what sociologists like Orlando Paterson call “social death.”

Today there are still boats at this exit, hundreds in fact. But they are the small and colorful ships of Ghanaian fishermen, and I will never forget the expanse of humanity that I saw as I walked out into the sunshine. Expecting more sadness, I saw only vitality, and I devoured the extraordinary sights and sounds of the life that now occupied what had been a place of such pain. 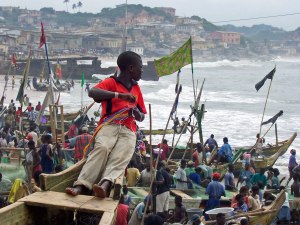 They that go down to the sea in ships, that do business in great waters; These see the works of the LORD, and his wonders in the deep. For he commandeth, and raiseth the stormy wind, which lifteth up the waves thereof. They mount up to the heaven, they go down again to the depths: their soul is melted because of trouble.   Psalm 107.