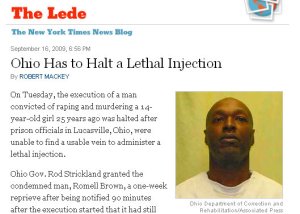 The Lede, the main New York Times news blog, is reporting that Ohio officials were forced to halt an execution by lethal injection when — 90 minutes after it started — technicians were  unable to find a usable vein. The description of the episode is horrifying, with the condemned reported to have tried to help the executioners find a vein.

As a death penalty opponent in Ohio said today:“The sentence is death, not torture plus death.”

This will almost certainly reignite the question of whether lethal injection does or does not constitute cruel and unusual punishment.

My objections go deeper, and relate to whether there is any way a death penalty can be fairly applied.  I think it cannot, and I would share with you one of the most eloquent paragraphs I have ever read,   an excerpt from Harry Blackmun’s dissent in Callin v. James (1994) . Blackmun argues that a fair death penalty is not possible:

From this day forward, I no longer shall tinker with the machinery of death. For more than 20 years I have endeavored…to develop…rules that would lend more than the mere appearance of fairness to the death penalty endeavor…Rather than continue to coddle the court’s delusion that the desired level of fairness has been achieved…I feel…obligated simply to concede that the death penalty experiment has failed. It is virtually self-evident to me now that no combination of procedural rules or substantive regulations ever can save the death penalty from its inherent constitutional deficiencies… Perhaps one day this court will develop procedural rules or verbal formulas that actually will provide consistency, fairness and reliability in a capital-sentencing scheme. I am not optimistic that such a day will come. I am more optimistic, though, that this court eventually will conclude that the effort to eliminate arbitrariness while preserving fairness ‘in the infliction of [death] is so plainly doomed to failure that it and the death penalty must be abandoned altogether.’ (Godfrey v. Georgia, 1980) I may not live to see that day, but I have faith that eventually it will arrive. The path the court has chosen lessen us all.”