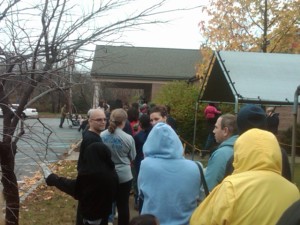 Every so often, “Media and Mayhem” focuses on the “Mayhem” part of the blog title.

For many years I have been studying how society — media, government, all institutions — operate during times of  social stress. What happens when normal social norms and media practices confront catastrophe or danger? How does an atmosphere of fear  affect our behavior and our attitudes? How do all the new and old media of communication respond?

A pandemic is an interesting case. It is not an event in which illness and death occur in one mass conflagration, but a series of events — millions in fact — that occur outside the lens of collective public scrutiny.  In other words, you don’t see the whole thing at once.

On any given day and at any given moment, most people are feeling fine. They very well might not have seen anyone sick.  Pandemic damage unfolds slowly,  the  cumulative effect of all these infections and deaths.  The mass media will cover the worst (and all too real) atrocity tales of young children dying quickly  and unexpectedly, but the massive and speedy infection of millions of people will occur quietly.  No buildings explode. No  planes crash. No bridges collapse.  The infection spreads.

And the solutions are not the kind of visible dramatic actions that are unleashed after other kinds of catastrophes: There are no beaches to storm with troops, no fire trucks to dispatch.

There are vaccinations. Hand washing. And if symptoms occur, there is a very effective drug called Tamiflu.

So this weekend I took my 12 year-old daughter for a vaccination. I am almost  embarrassed at the amount of expert opinion I sought before doing this. But after I was absolutely convinced that it was important,  and after reading the most recent statistics about who was at risk (I actually am a regular reader of an outstanding government publication with the appetizing title “Mortality and Morbidity”) , we got in the car and drove to a county health department here in New Jersey.

And I still can’t believe what I encountered.

The county staff could not have been more efficient and welcoming. This was public health at its best. Long lines of children most likely to suffer serious complications from an infection were getting the vaccine.  The line was moving. And I saw many seriously disabled kids whose disabilities, I was told, made them especially vulnerable to complications if they got the flu.

And wouldn’t  you know that here and there people in line were using the time to rail against health care reform, to moan about the disaster that is inevitable when the government gets involved in health care. I was incredulous. Here they were,  potentially protecting the lives of their children courtesy of an efficient government effort to deliver vaccine, and their response was to complain.

But this post is not about what health  care reform should look like or how much government-delivered care there should be.  It’s not even that much about the complaining I heard.  Scared people look for scapegoats,  and while I might think they are horribly misguided,  I learned long ago that people concerned  about a threat to their children (me too) will babble all manner of  legends,  folk-theories,  and political propaganda.

What I did learn was the way that fear can blind people to painfully obvious facts. Who did these people think had gotten them the vaccine?  Pharmaceutical companies produced it.  And then thousands of much-maligned bureaucrats at federal and state agencies, schools, health departments, law enforcement agencies, and other institutions worked to get it to my daughter on October 31, 2009 at 3:00PM on a rainy Saturday.

I will not romanticize the functioning of any large institution. Logistics and organization can be messy, confusing, and occasionally negligent. It is all part of how institutions  function.

But could there  be anything more misguided and loony than to get angry at the involvement of government in health care at the very moment that government has delivered a dose of vaccine to your child?

To the some of the moms and dads I met Saturday : It’s natural to be afraid. It’s even natural to lash out after seeing a news report about children dying. It’s natural to channel your fear into blame. But just because its natural doesnt mean it isn’t dumb.  It was one of those bureaucrats  doing their job — and doing it well — that got you the vaccine.

And before you so quickly buy into the dishonest reactionary demonization of  any government involvement in health care, remember the public health nurse who calmed your little one down before the vaccination.

You know which one.  The nurse to the right.  The smiling one. The one from the government.

1 thought on “My 12 Year-Old Daughter Gets an H1N1 Vaccination: With Gratitude to the Much Loathed Public Option”