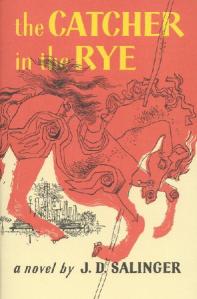 When I was 14, my Mom left a copy of Catcher in the Rye on a table in the living room.  Mom had returned to finish college and the book was required reading in one of her classes. I picked it up, went to lie on my bed, and knew that anything left around “accidentally” was probably at least a little steamy. Fourteen year-olds place a high premium on steam.

I was right, although I stopped expecting steam in Mom’s textbooks just several weeks later when, ready for something along the lines of Harold Robbins’s The Carpetbaggers, I found myself searching for the “good parts” in something called The Critique of Pure Reason. No good parts. But I still remember the night I picked up Catcher in the Rye.

I know that the “I never felt understood until Holden Caulfield” trope long ago morphed from iconic to trite.  Over the years, as I would hear others recount the same experience, I would feel less and less like anything special or unique had happened to me that night. I even remember years when my insecurity led me to believe that it was “literary” to dump on Salinger, to consign him to the bin of the obvious and the superficial.

That I was the one who was obvious and superficial would never have crossed my mind. Thank goodness Salinger held up longer than my pretensions.

The first killer-moment I remember in “Catcher” was a hilarious school assembly. I choked with laughter as Holden described a pretentious speech by a bloviating school benefactor being interrupted by a thunderous explosion of flatulence. (Hey, give me a break. I was in 8th grade!)

But even more, I remember experiencing the rest of the book as story after story of a kid whose cynical bravado only slightly, and usually ineffectively, masked his guilt and sadness. It was a revelation discovering that I wasn’t the only smart-ass struggling to keep loneliness at bay. In fact, simply learning that night that I wasn’t so peculiar was enough to lift some of that loneliness.

One episode in particular has stuck with me:  After having been kicked out of school, Holden is on a train going home when he meets the mother of one of his classmates. His cynical side comes first and we learn that the classmate was more than a bit of a jerk. But almost immediately, Holden – afraid to hurt the mother’s feelings – goes into an insincere riff about how great the kid is. And the mother beams. Holden may be filled with disgust at the kid himself, but – when it comes to talking with the kid’s mom – he can only launch into one of his bouts of phoniness. Again and again, Holden’s disgust and rebellion fight it out with his “feeing sorry.”

That’s why I have always felt that the power of the novel lies, not in Holden’s cynicism, but in his losing battle to present himself as a cynic. His effort to play the part of a sophisticated smartass is constantly sabotaged by his inner turbulence and insecurity.

He fails as a jerk.

I know that some view the “feeling sorry” part as naive, as taking the edge off  Holden’s justified disgust with hypocrisy. Why not pass guilt and go directly to alienation? Fair point. That would not, though, have made as much sense to me, not during an adolescence when the rapid-cycling between anger and insecurity, between certainty and complete confusion, was dizzying.

In the intervening years, I have sometimes succeeded and sometimes failed as a cynic. I have hurt others and been hurt myself. I have sometimes wrapped sadness in a veneer of jokes and put-downs. I have also occasionally been smart enough to share rather than hide my scars.

But never, in the years since I first read Catcher in the Rye, have I forgotten just how much I am capable of fooling  myself and just how much, regardless of how I might occasionally act  like a jerk, I will always be rooting for that jerk to fail.

I hope that, to at least some extent, he has.