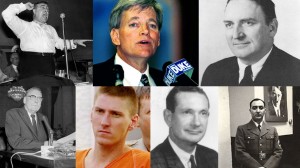 I don’t want to give the impression that dispassionate distance is my automatic response to every bit of craziness that occurs in society.

I am not always a social scientist. I feel rage and anger.  My first reaction on  hearing some loony extreme view is not to immediately to unfurl the flag and  celebrate the right to free expression. I do eventually celebrate free expression, but that is not until I finally calm down and pull back from some of the nastiness of which I am capable.

Today, though, after a week of hearing some of the most vicious and extremist rhetoric I can recall, I have been thinking  a lot about three pieces of writing that strike me as indispensable in understanding our latest period of lunacy.  Believe me, I almost choked when I heard Sarah Palin talk about “reloading,”  but today I am thinking less about her mindlessness than about how and why we periodically produce movements so drenched in rage and racism. Why does the United States have such a rich and revolting tradition of individuals  like Palin who — while not  even remotely equipped to think with any originality — are brilliantly  equipped to read the rage and stoke the  hate and irrationality of others?

This is obviously a complex question. But just over 45 years ago, in a classic essay entitled The Paranoid Style in American Politics, the historian Richard Hofstadter opened a door on one of America’s  creepiest corners, a place where every loony strain of racism, nativism, millenialism, sexism, homophobia, and nuttyism come together in an incoherent, yet incendiary, brew.

This where you find the library  for every  imaginable conspiracy theory that a twisted mind is capable of imagining. And this is also the setting for Hateland’s fully stocked pharmacy —  shelves full of folk-devils of every race, ethnicity , gender, and sexual orientation available to relieve anxiety about everything from a recession to an upset stomach.

Hofstadter understood so much of this and I can’t recommend his essay strongly enough.

Also, in today’s New York Times Frank Rich covers some of the same territory. Rich zeroes in on one of the key symptoms of paranoid politics —  a group enraged, out of control, and armed with a lengthy and astoundingly  incoherent list of grievances. These are the sophisticated political thinkers who can weave Chinese food, unpolished shoes, and aspirin into the evidence that finally proves the government’s secret plan to require weekly colonoscopies.

Finally, I recommend the latest annual report of the Southern Poverty Law Center, Rage on the Right: The Year in Hate and Extremism, by Mark Potok.  The report is packed with proof that all the hate and incoherence and bizarre conspiracy theories have  attracted adherents, money and angry people  eager to move from anger to violence.

We can laugh all we want at their  mind-bogglingly nutty ideas, but we would ignore them at our great peril.

You don’t have to make sense to make trouble. Serious trouble.

6 thoughts on “Why Do Things Get So Nutty Sometimes?: Three Indispensable Readings”