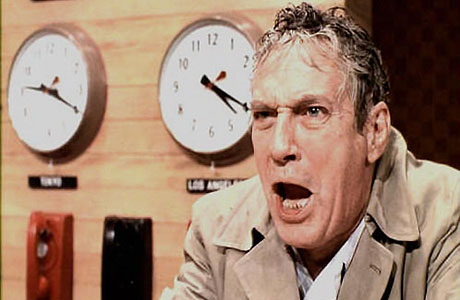 It’s time for one of my extremely rare Peter Finch “Mad as Hell” moments.

By now, we are fully accustomed to the instant experts who immediately appear on cable news after high-profile acts of mass violence. The 24 hour news beast must be fed, and an endless line of charlatans, opportunists and bloviators stand ready to pronounce at a moment’s notice.

Friday, though, during their coverage of the LAX shooting, MSNBC really lurched into “expert-looniness.” Sometime in the early afternoon, they invited an airport security consultant to come on the air and speak about the ongoing events.

At a moment when details were still sketchy, this former El-Al official — who may indeed possess some specialized knowledge — began a long, incoherent rant about alleged deficiencies in our nation’s system of airport security.

My disgust has nothing to do with the substance of what was being discussed. The ranting expert may have made a valid point or two. Or more. Or none. The “conversation” simply wasn’t comprehensible enough to tell.

But I will never accept that it is anything other than grossly irresponsible to begin pronouncing about motives, remedies, causes, and negligence before even 20% of the facts about an incident are in; while some people in the vicinity of the incident are still uncertain about what has happened and might be in locations with televisions broadcasting the rant.

I’m tempted to name this person. His cup overflowed with just the kind of “wisdom” you’d expect from someone with the nerve and thoughtlessness to babble away while an incident is still unfolding.

But because I suspect his appearance was designed to raise the profile of his consulting business, I won’t.

But I will never stop being disgusted with the instant experts for whom a public tragedy becomes a career opportunity.

What was MSNBC thinking when they allowed this opportunist to spout such anxiety-provoking speculation?

I guess that, when you build a 24 hour news hole, they will come.