Today on Meet the Press, George Will joined a growing group of conservative thinkers who — temporarily setting aside deeply held beliefs on the public policy and  role of government  — have expressed a more basic and profound concern about what it means when nothing a President  says can be trusted.

Will imagines a scenario in which Trump might claim the need to exercise a pre-emptive nuclear option (something I absolutely oppose) and we might have no idea if the facts he presents to justify such a disastrous move are even remotely true.

To think we thought Stanley Kubrick’s character Dr. Strangelove was a cartoon.

We are living the cartoon, in all its absurdity and potential horror. 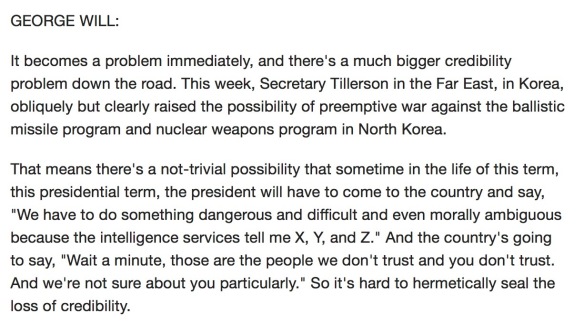 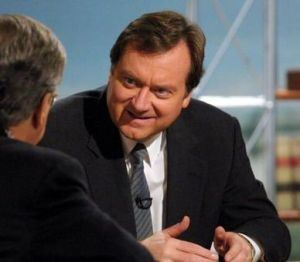 The last few days have been filled with tributes to NBC Chief Washington Correspondent  and host of Meet the Press Tim Russert.

I have one to add.

In the fall of 2005, I left a senior administrative position in which one of my responsibilities was government and political relations. There were some years when politics was really in my blood, especially when there was an issue to be fought or a worthy project to be funded. There also were years when the trek back and forth to our state capital was excruciating. At least, because my “client” was public higher education, I always believed deeply in the inherent value of what I was selling.

But then I lost it.

Mostly, I became completely unable to tolerate a parallel universe in which a politician’s words and actions often simultaneously contained 1) an ostensibly noble, yet utterly phony, public rationale and 2) a more authentic, yet venal or self-serving, private rationale. I know. That’s politics. And it is a game. But enough was enough.

It was almost indescribably cathartic in those days to watch Tim Russert who – with infinite civility – would fillet those spinmeisters and phonies right down the middle. He always knew exactly what questions a guest wanted to avoid, issues on which they were vulnerable to charges of hypocrisy or excessive spinning. And he would ask them.

“Senator, why with all your public support and enthusiasm for the health care bill, were you absent on the day the vote took place? Why in two days did you make two speeches that offer completely contradictory views on the Iraq war? Why did you vote so enthusiastically and visibly for the Smith/Jones bill, yet then vote against every appropriation that would have made it a reality?”

And on and on.

No one cut to the chase with more decency.

We live in an age of salivating provocateurs, people like Bill O’Reilly and Michael Savage and Lou Dobbs,  who confuse rants and smarts. Completely unaware of how ridiculous they look, they get so lost in their infantile tantrums that — for all their histrionics – they miss the chance to really cut through to the truth.  They ask incendiary questions and get incendiary answers. They create a lot of heat, generate almost no light, and — while everyone is getting hot and bothered — no one notices that the hard questions, the nuanced questions, have not even been asked.

Russert, on the other hand, never lost his civility. Yet he still could nail a sleazeball better than any of the loonies in the media shoutocracy. He knew that skewering was best accomplished by preparation, substance and civility, by asking precisely the right questions. The slippery and the ill-informed were unmasked before a national audience without any assault on their essential dignity as human beings.

After Tim Russert, no journalist will ever be able to persuasively argue that getting to the truth requires that another human being be demeaned or berated. When Tim Russert’s questions led to your humiliation or the end of your political career, you had no one to blame but yourself.