Yesterday, waiting in suburban New Jersey for a train,  I looked up and saw the scene below on the telephone wire looming right above the train platform. I knew that the birds would disperse as soon as the train arrived, and in fact the lights of the train were getting close. I quickly snapped this photo.

It’s not that I needed any proof of Alfred Hitchcock’s brilliance. But yet again I was reminded that — for me at least — there has never been a filmmaker who so skillfully and insidiously plays with my fears, anxieties, and obsessions, not to mention leaving  haunting, mental residue that lasts for decades.

It was Tuesday, September 19, 2017. And, just for a moment, I felt like I was living in the village of Bodega Bay, California depicted in Hitchcock’s The Birds 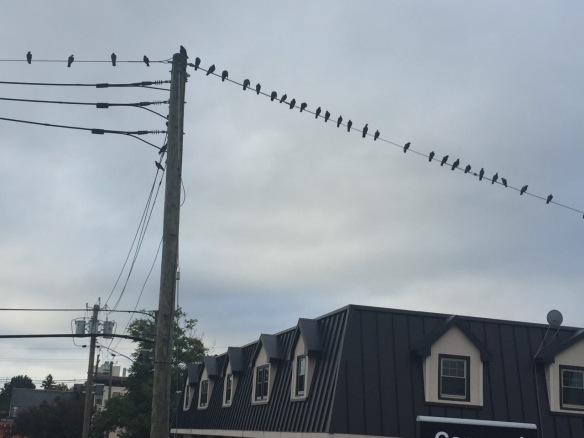 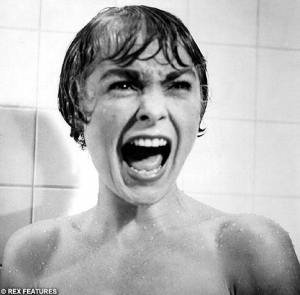 Ok,  so I’m sitting here alone in the dark scaring myself crazy for the umpteenth time watching Hitchcock’s masterpiece Psycho.

It reminded me of a Saturday night in the early 1960s when my parents left my sister and I home for the evening — I think we were 11 and 12 — and one of the television networks actually broadcast the film. We were terrified and our parents came home to us whimpering and cowering in the corner of the living room.

The reason I stopped the film for a moment, though, is that yet again I am marvelling at the musical score by the extraodinary Bernard Herrmann.

Have a film and a musical score ever fit together so well, with such extraordinary and terrifying results? In fact, have a director and composer ever been so indispensable to each other?

Don’t laugh, but it just might be a little too dark and little too late and a little too rainy here on the east coast to turn it back on. Janet Leigh is about to be stopped by THE POLICEMAN and, if you’ve never seen the film and never seen THE POLICEMAN’S sun glasses,  get some friends to keep you company and do so immediately.

Or maybe I could fast-forward past THE POLICEMAN. Let me go get a Mallomar while I decide.  In fact, I think that unfinished barbecued chicken leg is still in the fridge.